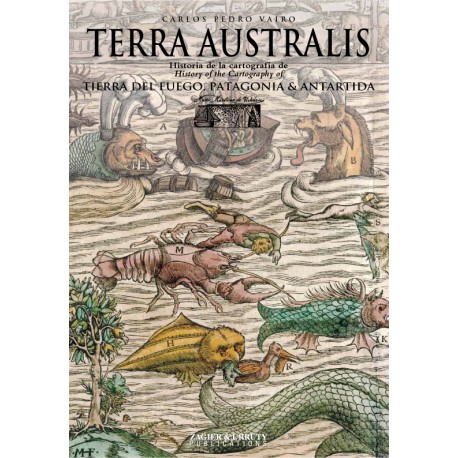 The map collection of the Ushuaia Maritime Museum displayed along the history of the cartography of the southernmost parts of the globe. A high quality bilingual volume of the Documentos series. Terra Australis opens many windows into the study of the geographical past and encourages the reader to delve deeper into other sources. Besides, Vairo's work triggers every sort of association and analogy with our present world, whose globalization process the much talked-about, as if it were something new began its expansion hand in hand with the charts that European seafarers developed during the age of conquest and colonization of the Indies.

Carlos Pedro Vairo, who graduated in museology, is a passionate practical and theoretical investigator of all topics related to the past and present of Patagonia, Tierra del Fuego and Antarctica. He has played multifaceted roles as navigator, writer, photographer, collector and founding member of the Ushuaia Maritime Museum, becoming a world reference in all matters relating to the End of the World. Terra Australis is his most ambitious project, reflecting years of investigation, during which he searched around the globe for maps, drawings, accounts, sailing routes and all many other items which have allowed him to assemble the valuable archives of the Museum, and then, to write this book.